Review of Matrix element i by AudioScienceReview.com

This is a review and detailed measurements of the Matrix Audio Element i USB DAC and Ethernet/Wifi wireless streamer. It was kindly sent to me by the company and costs US $990.

The Element i embodies the beautiful design language of other (newer) Matrix Audio products: 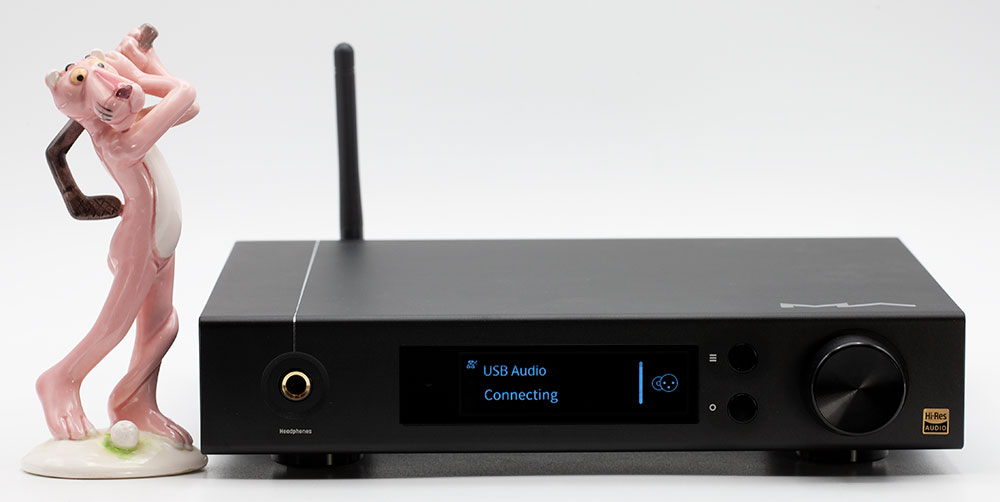 The menus and settings are controlled using two buttons and rotary encoder. There is a headphone out but I did not get a chance to test it yet. Will do as a follow up (edit: now added to the review).

The back panel shows the usual suspects: 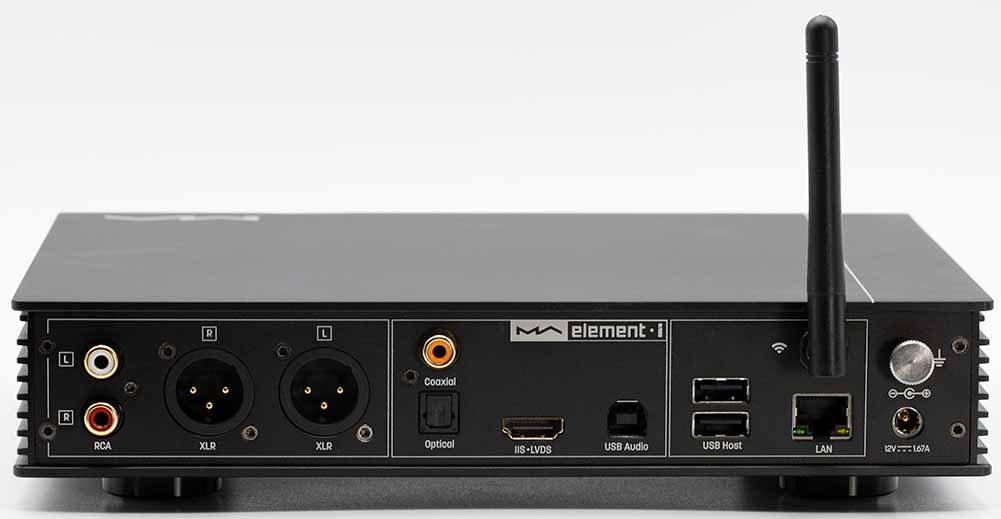 Unlike other Matrix Audio products I have tested, the Element i uses an external switching adapter. It is about twice the size of a phone charger.

Both wired Ethernet and Wifi are there as is my favorite, Roon player streaming protocol. Roon however complains that the implementation is not certified. I had no trouble using it but I encourage Matrix Audio to get the certification.

For my testing I focused on USB Input and XLR balanced line outputs. I had previous tested the Element i as part of my review of EtherRegen switch.

As noted, here is our dashboard using USB input and XLR output: 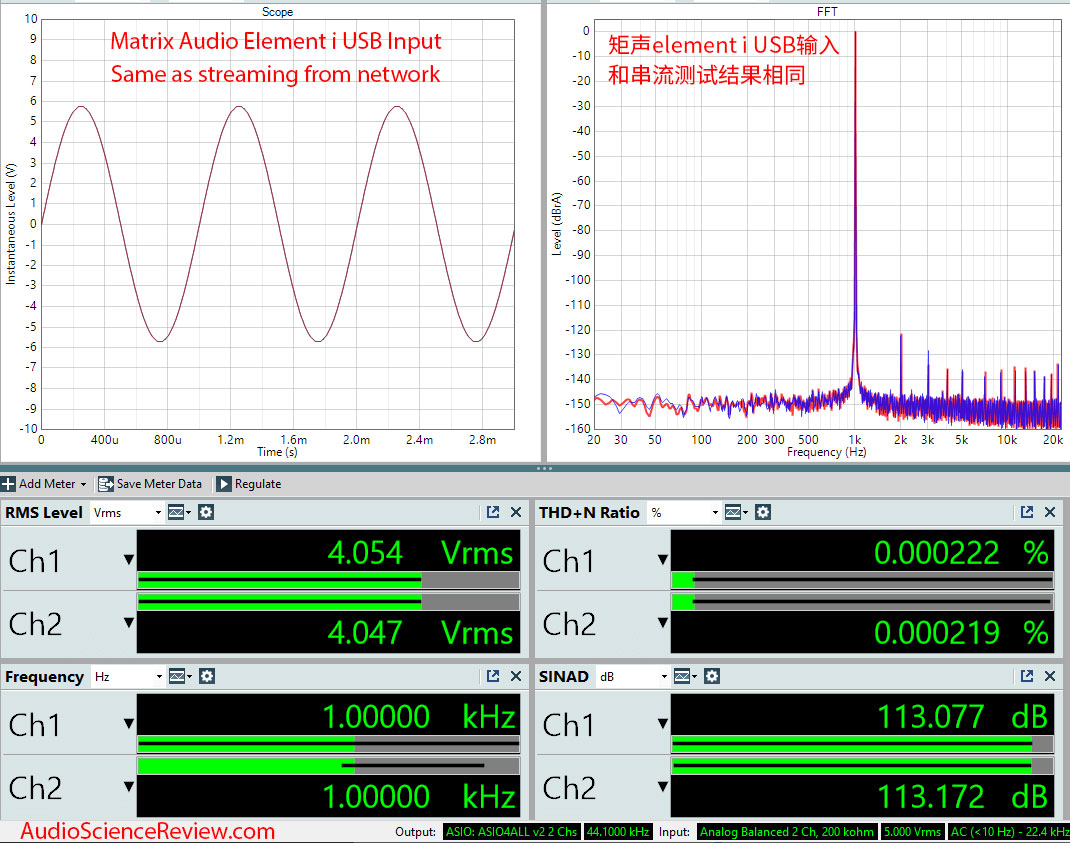 Output voltage is 4 volts which is the nominal value I like to see. Distortion is down below -120 dB which makes it absolutely inaudible. SINAD is lower because it also adds noise to the distortion. Performance is quite respectable in this regard landing squarely in the middle of our top quadrant of all DACs tested: 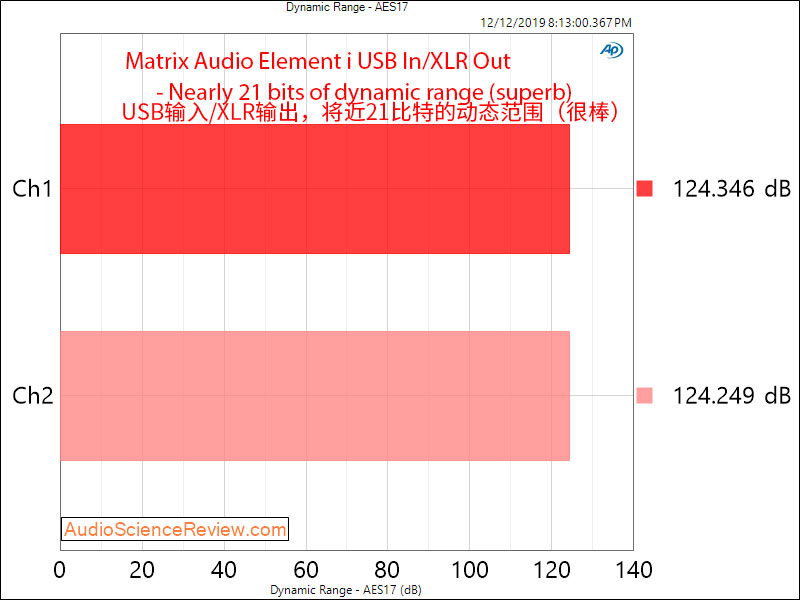 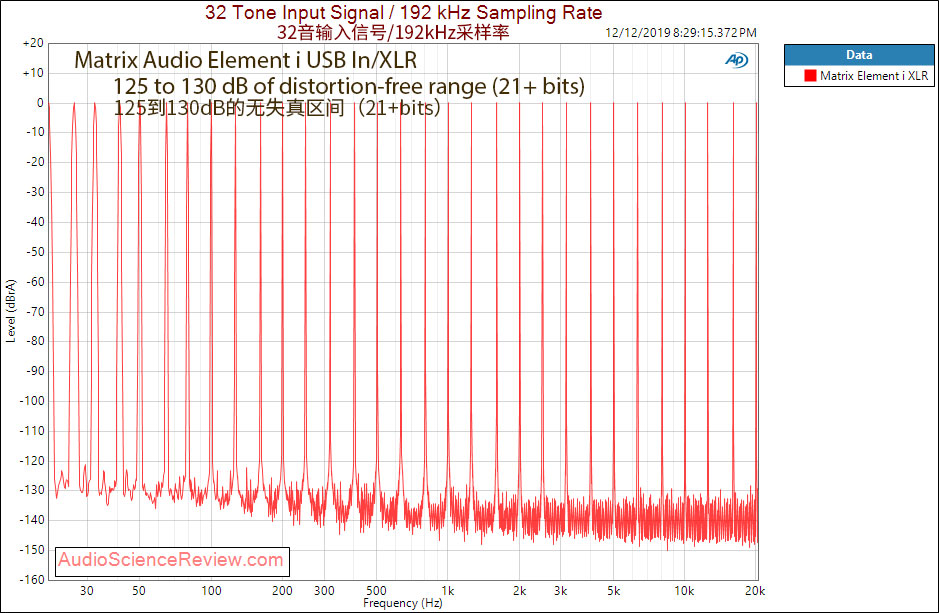 There are three different levels of jitter reduction in Element i: 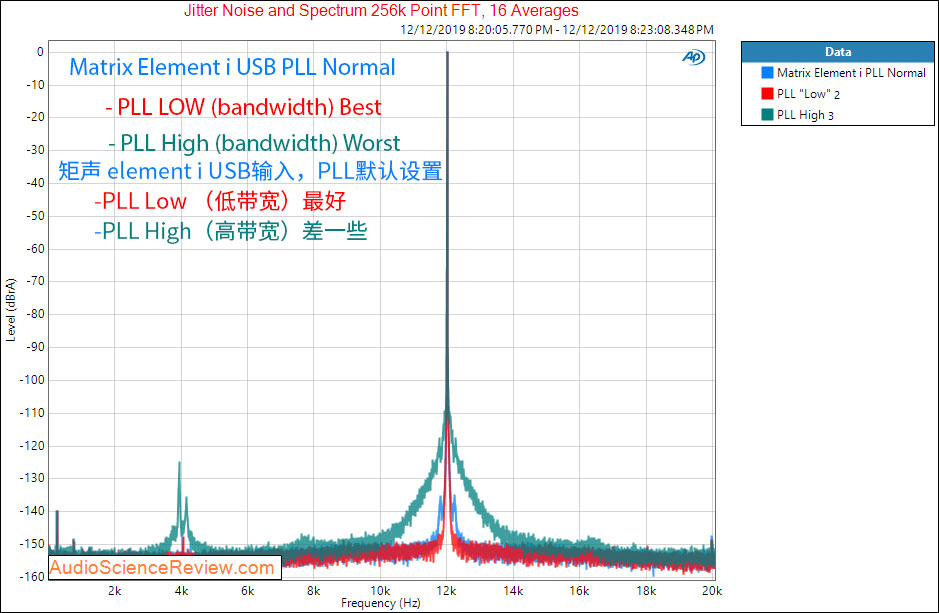 Default is "Normal" which allows a tiny bit of low frequency jitter (in blue). It is utterly inaudible but setting it to LOW gets rid of that. Likely not an issue with USB bus but if you use other serial digital inputs, low setting may not allow the unit to lock on incoming data. Or take too long to latch onto its sample rate. For this reason, there is the other extreme which is "HIGH." Note that Low/high here refers to bandwidth the PLL (phase locked loop). The higher the bandwith, the better/faster the ability of the unit to lock on input. But it also allows more jitter in.

There is also a global setting for "Jitter Eliminator" which I assume is the asynchronous sample rate converter in ESS DACs: 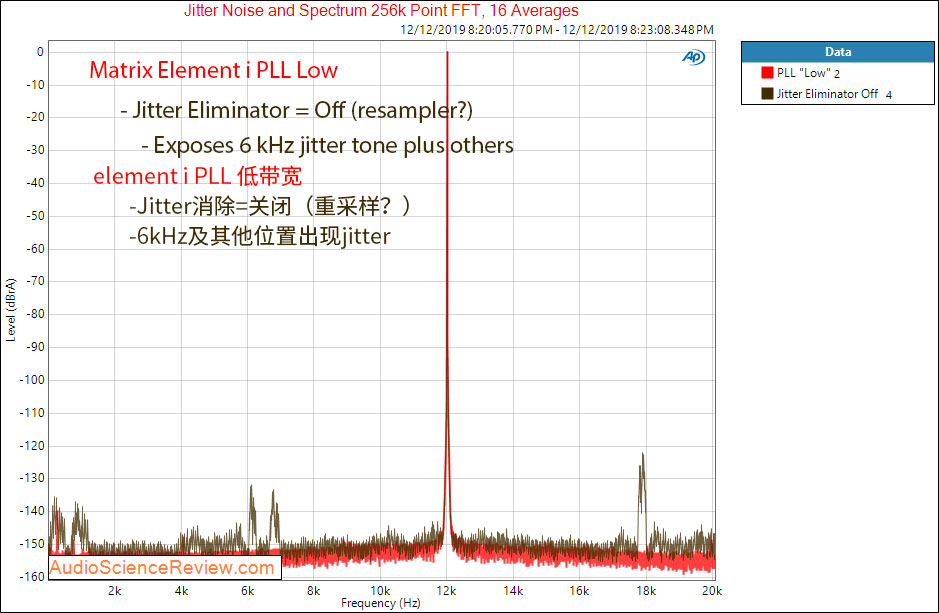 I suggest leaving it on. 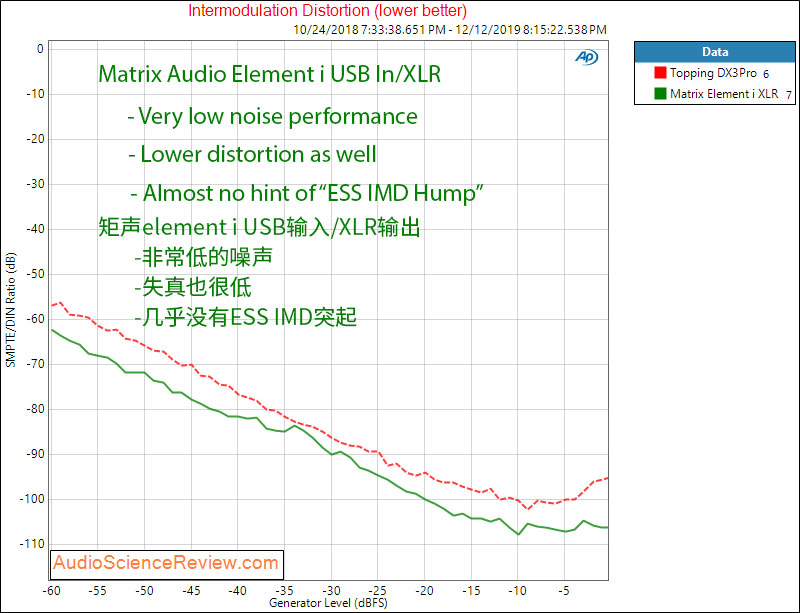 Thd+N (distortion+noise) across frequency range and much wider bandwidth than the dashboard shows one clean implementation: 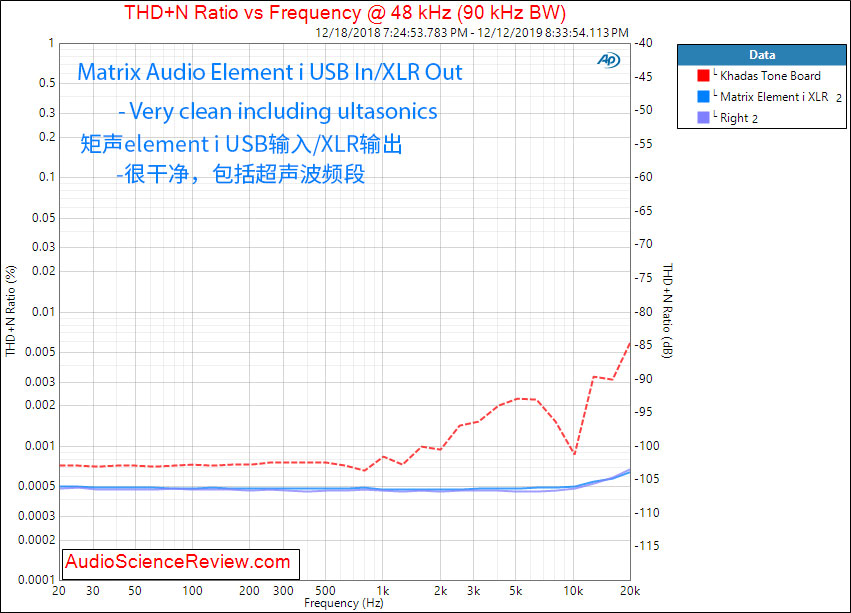 There is almost no rise with frequency which is a hallmark of an excellent implementation. 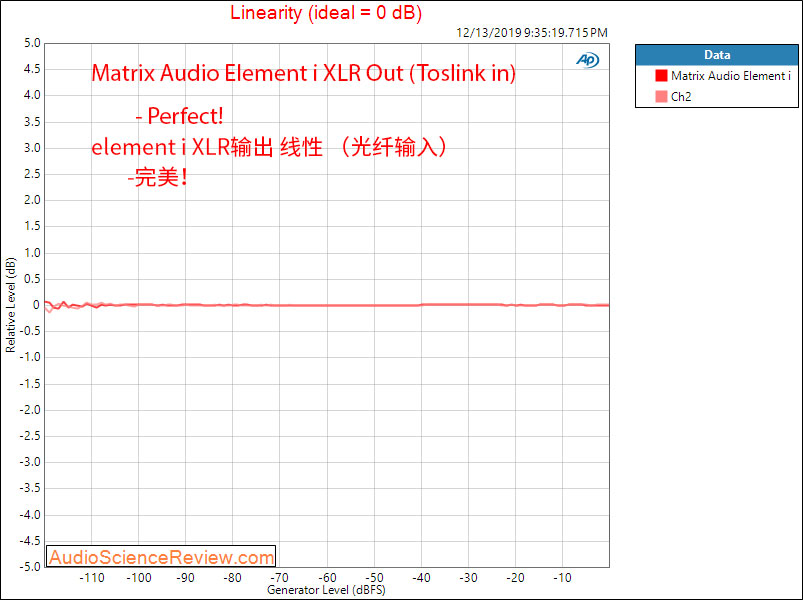 It doesn't get better than this. Likely would be good another 10 dB lower.

Prior to performing the above test and while the unit had just powered on, I measured THD+N across 10+ minutes: 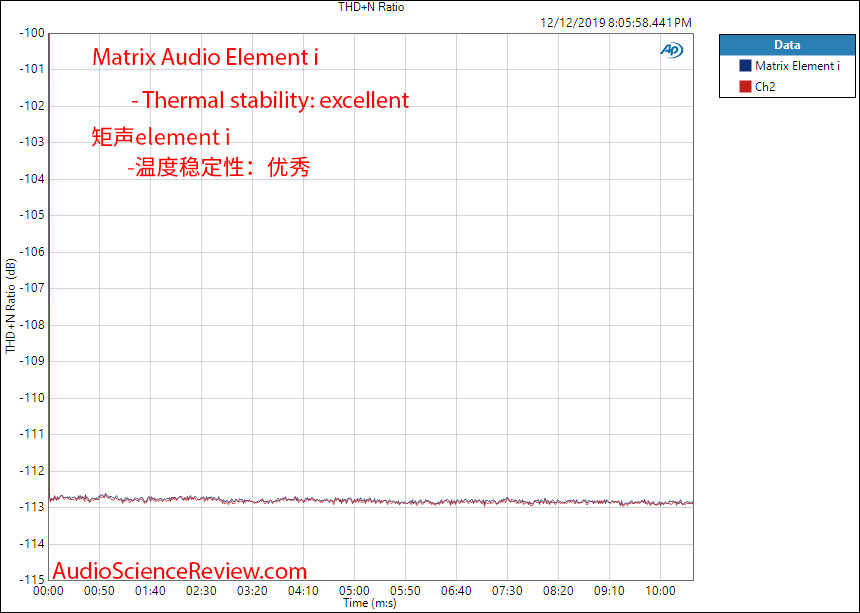 As you see, there is no temperature dependent effect. Performance is rock solid from start to finish. So no need to leave the unit on, or worrying that as it gets warmer, performance gets worse or better.

Let's start with power into 300 ohms: 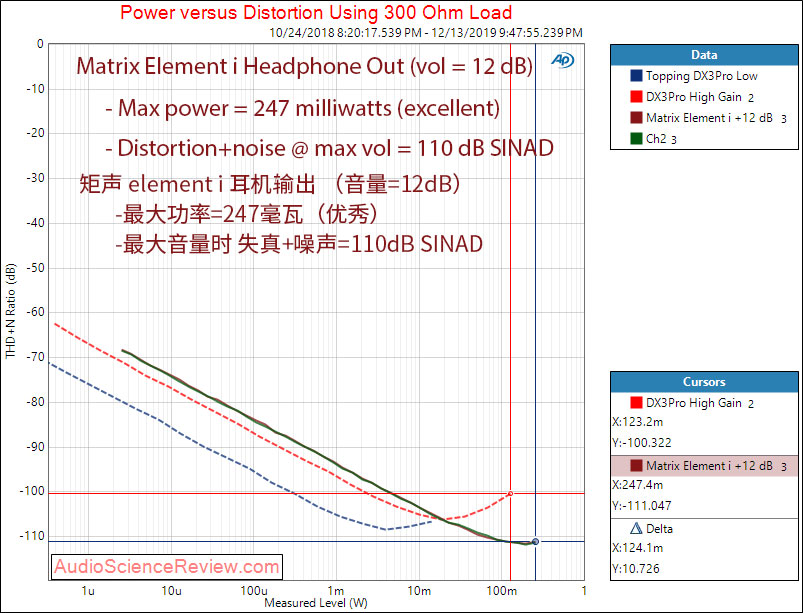 I like to see 100 milliwatts into this load. Element i sails past this delivering 247 milliwatts. This should enable it to drive just about any high impedance headphone.

Noise is initially higher than reference Topping DX3 Pro due to lack of low gain setting. As demands of power increases, the Element i has lower distortion than Topping DX3 Pro and as a result, beats it on both power and

Going the other extreme with 33 ohm load we get: 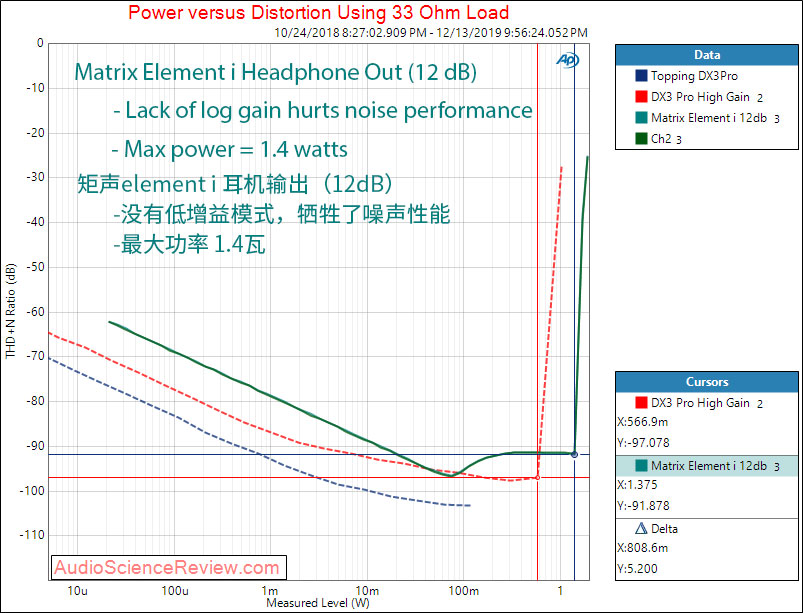 A secondary source of distortion kicks in keeping the Element i from beating DX3 Pro on distortion. But it does sail past it with higher output power.

I don't usually compare DAC+headphone amp combos with headphone amp-only devices but for sake of argument, I did just that: 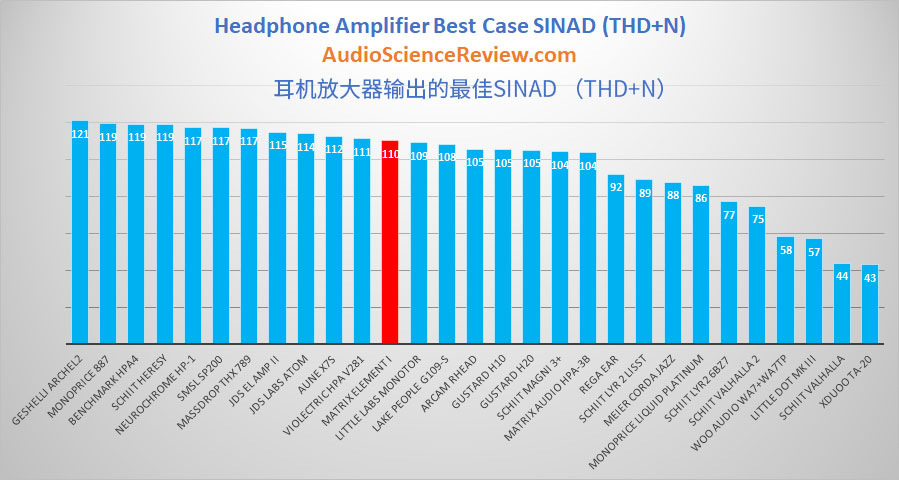 Given the fact that the DAC in Element i has SINAD of 113 dB, it can't do much better than this. So likely the amp would rate around 113 dB SINAD so pretty close to state of the art.

I will make this brief: performance with both Mrspeaker's Ether CX and Sennheiser HD-650 was excellent. Lots of power, lots of dynamics, great bass, etc.

With some companies DNA of good engineering runs in their blood and such is the case with Matrix Audio. Every aspect of the Element i oozes with quality from the case work to measured performance and thermal stability.

If you need a streamer and want to be done with it, the Element i is it.

It is my pleasure to strongly recommend the Matrix Audio Element i DAC and Streamer.